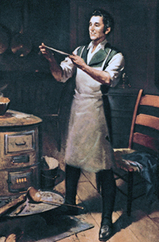 The inventor or vulcanization, Charles Goodyear (December 29, 1800 – July 1, 1860), is most credited for the vulcanization process itself. He was born in New Haven, Connecticut, and was the eldest of 6 children. In the year 1824, Goodyear married Clarissa Beecher, and had 5 children with her. He worked at a hardware store, making a majority of his income there. He began experimenting with rubber and its works sometime between the years of 1831 and 1832. He first successfully patented the vulcanization of rubber in the year 1844. He was on a flight to see his dying daughter. After he arrived, he received news that she had already passed away, he then collapsed and eventually dies. He died with 2 hundred thousand dollars in debt. His family did eventually pay it off with the fortune they made in the rubber business.